A Star is Born…

From an inconspicuous very humble beginning to a rising star.

You have seen him playing bit parts in the most awe inspiring films. You have seen him in eateries, from the poorest to the most fancy of restaurants, working silently to provide comfort to the patrons. He’s been a most dutiful servant to all, quietly waiting for the day to be recognized and honored. He was given his big break earlier this year, being presented in all his glory to the world. From there his reputation has grown. His picture has been an inspiration to so many who now understand his role to be one of great worth. His latest foray into the political realm was, at first, met with derision. That soon changed, and he has become the very symbol of the most powerful man in the world.

“This image seemed like a proper response to the first Presidential debate,”

Not to be outdone by MT Chair, MO was out and about channeling her star qualities too. Wearing a “modern weave dress”,  a very colorful (to say the very least) mini cardi and a “statement necklace”, designed by Jason Wu for Miss Wu, to show her softer more feminine side.  The new contemporary collection, which is  ‘a little bit more playful and a little  younger,’ will retail for less than the  Jason Wu line, and launches in partnership with Nordstrom in January.

As always MO is the height of fashion. 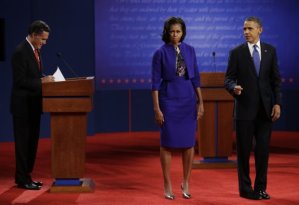 Awkward…. How to make a graceful exit….back out?