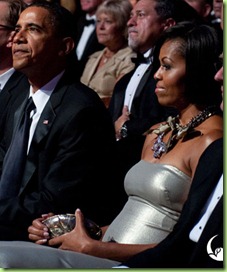 I know you remember this shiny silver number worn by FLOTUS,  but a new gold

number took its place as the arts were celebrated this weekend at the Kennedy Center. 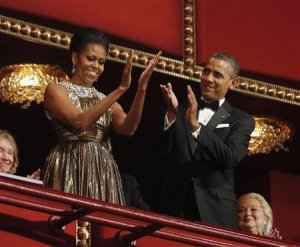 Look at those toned guns! No one outshines MO in the glitterati department. She chose a gold lamé chiffon encrusted shoulder gown for this particular occasion, by Michael Kors from his Resort 2013 Collection. Isn’t it nice neither MO or BO are being affected by the economic problems facing so many of the rest of us? If either were being graded on self importance, they would both get an A+. MO can’t help herself, even she applauds who she is, right along with the rest of the supplicants in attendance. I suppose being one of the most shallow people to ever reside in the White House is now considered flattering and, they will need a few more billion to be entertained.

BO was out campaigning again to assure Americans it’s his way or the highway. He’s even suggested the executive should be able to raise the debt ceiling without benefit of congressional approval. He warned the R-words, if they didn’t pass his outrageous demands, there would be no K’NEX under the Christmas tree for them. The D-words are delighted about the “fiscal cliff”. While they pretend they don’t want all the tax increases heading our way, in all reality they are rejoicing, it means more money to spend on their beloved entitlements. With that 2% payroll deduction implemented by BO and his progs two years ago, which affected Social Security, we now face another shortfall. It’s all smoke and mirrors. Raising taxes on those making more then $250,000 won’t affect people like Warren Buffet or George Soros. They live off of investments and have zero payroll income. It will punish small businesses and married couples. In other words the middle class. From Clarice Feldman at American Thinker

Marriage  Penalties. Means testing and joint filing has resulted in hundreds of  billions of  marriage penalties for low and middle-income households.  Essentially, when moderate-income couples marry, their marginal tax rate moves  up from, say, 25 percent, to the 50 and 80 percent ranges

If they decide to raise the rate on investment income, those with 401k investments will be severely hurt. Most of them depend on the dividends to help secure their retirement.

We keep hearing from the left “elections have consequences”.  The consequences of this election is to create a permanent Democrat majority through government manipulation and social engineering. In other words a permanent underclass dependent on the Government. How sick is that?

In addition to all the other problems with highly  subsidized, income-tested health care benefits, will come an even more permanent  underclass which, being economically rational, will choose not to earn another  dollar rather than lose more than a dollar of benefits.

Conservatives often speak of the Obama-Pelosi-Reid  axis as seeking to create a permanent Democratic majority through big government  handouts. This implicit marginal tax analysis shows that it is much worse than  it seems; the permanent big-government majority will not be there by choice, but  by government-created economic necessity….

A permanent, Democratic-voting majority living off  government benefits with no way out. It really is that bad, and this really is a  once-in-a-lifetime chance for the Democrats to achieve a permanent,  economically-enslaved majority.

Which brings us back to what the D-words really want,  more taxes from hardworking Americans to support an under class to keep the D-words in power in perpetuity. It isn’t that complex and the plan is as simplistic as it gets. Tell me that isn’t evil.