What caught my eye…

Well, we’ve all made it through another Apocalypse. Looks like we’re not going to be let off the hook that easily. Doomsday preppers who’ve gone underground can come out now. All those people in Turkey and China heading to the magical mountain to escape can go home. The history channel can stop running all those Doomsday scenarios.  Michigan must be relieved to send all those kids back to school.

…….it is only fair to point out that what is amusing for me is not amusing for others. Here in Michigan, the panic is actually causing schools to close.

SOUTHFIELD (WWJ)- Thousands of students will have an extra long holiday break after school administrators in at least two Michigan counties decided to cancel classes because of talk surrounding the shootings in Newtown, Connecticut and rumors connected to the Mayan calendar predicting the end of the world.

Schools closed due to talk.

Nice for the teachers to have a holiday, huh?

Breaking news from Gateway Pundit; Jon Hammar is being released today! The US Marine has been languishing in a Mexican prison for 4 months.

Yesterday, Bill O’Reilly and two US Republican Representatives threatened a boycott of Mexico if Jon Hammar was not released by Christmas.
This morning- Jon’s mother said her son would be released today.

It seems the extortion money for his release won’t have to be paid after all. Congrats to O’Reilly and the R-word Reps for making a big noise.

Head over to MOTUS for some great ideas for dinner. Check out all the threads for great  snark and some culinary delights. MOTUS never disappoints.  http://www.michellesmirror.com/ ht to Annie’sMom

Looks as if ‘Zero Dark Thirty’ is getting controversial. “The Pentagon inspector general determined this  week that Undersecretary of Defense for Intelligence Michael Vickers provided Ms. Bigelow and screenwriter Mark Boal with  the restricted name of a U.S. special operations officer who helped plan the  raid.” The State Dept had better hurry and apologize for hurting the feelings of Islamists. But, I doubt whether the apologies will be accepted. Maybe Obama can make another apology tour to soothe the sensitivities of the mullahs and tell them how great Islam is and how much they’ve contributed to the world. He could even reiterate how the people of the US can learn a lot from them.

U.S. on alert for Islamist ire to ‘Zero Dark  Thirty’

Everyone should just ignore Times Person of the Year.

It’s impossible to think of a less interesting, more predictable choice than Barack Obama, who also won the award four years ago. Perhaps there’s someone who wasn’t aware that Obama’s reelection was the big story of the year, and perhaps he will pick up this issue during a routine dentist’s office visit in a few weeks and raise his eyebrows. But I doubt it……..

Pretty much says how I feel about the choice.

Update; BO and co make it to HA…. “The president and the first family do not have any public scheduled events while they are in the islands, but Oahu motorists should expect unannounced delays as the presidential motorcade travels around the island.” 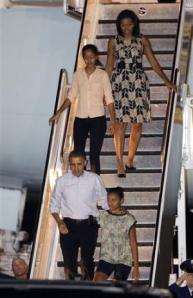 “Obama stay here may be cut shorter than usual since he leaves Washington without having a deal to avert the so-called fiscal cliff on Jan. 1.”  You can bet MO won’t be leaving with him. No one cuts short her fun for any reason.