Hitting the cover of Vogue ….again. If she didn’t love the limelight, why pose for so many mags? Do you think anyone will notice how different she looks on the cover from the pic with Preezy? Which proves photoshop can be your best friend.  And, notice how Preezy’s hair has strangely become much darker. Must have had another hair cut.

For the new issue, she wears the same  dress for the inside feature with the President, who is dressed in a  pinstriped shirt and a striped blue tie. Mrs Obama’s choice of Reed  Krakoff for  the cover is a significant one – she also wore the label in her latest  official portrait, and for the President’s swearing-in.

‘I always say that women should wear  whatever makes them feel good about themselves. That’s what I always try to do,’ she explained.

‘I also believe that if you’re  comfortable in your clothes it’s easy to connect with people and make  them feel comfortable as well. In every interaction that I have with  people, I always want to show them my most authentic self.’

Authentic self? Does anyone remember this?

Must not have been too authentic, MO and Oprah got tossed out first.

Or how about this? 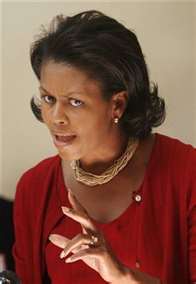 No pasted on comic eyelashes or Sharpie eyebrows. No white stripe down the nose. And, not a diamond bangle or squirty pin in sight.

There’s nothing “authentic” about MO anymore. She’s as plastic as they come. When the make-up has to be scraped off with a spatula, the pretense of any authenticity becomes pretty obvious. Of course, with all the trainers and coaches she has had, the shrillness has gone but, the intent has not changed.

While discussing her daughters MO stated how terribly difficult it was to give them a “normal life”.

She said: ‘The Secret Service has to change the way they do things; they  have to become more flexible. And they do. Because they want to make  sure that these girls are happy and that they have a normal life.

‘There’s a lot of energy that goes  into working with staff, working with agents, working with friends’ parents to figure out how do we, you know, let these kids go to the  party and have a sleepover and walk through the city on their own, go to the game.

‘It requires us to be there and be present so that we can respond and have the system respond to their needs,’ she explained.

The system? There have been other children raised in the White House. Chelsea Clinton was never in the public eye or used by her parents for photo-ops. She actually did have a “normal” life while her dad was Preezy.  So did Amy Carter. Neither one were shoved into the limelight. Their parents had more respect for their privacy. The Bush twins were rarely seen or heard about as well. MO may talk about privacy for her kids and a normal life but, those kids have had more photos in the last four years then all the others put together have had in their lives.

As they discussed their twenty year marriage, BO and MO commented on the “effect” being in  the White House had on their wardrobes.

The President says he went from having only two suits, to dozens.

‘Thank god,’ said Mrs Obama. ‘Let me tell you: This is the man who still boasts about, “This khaki pair of pants I’ve had since I was 20.” And I’m like, “You don’t want to brag about that.”‘

Laughing, the President added: ‘Michelle’s like Beyoncé in that song, “Let me upgrade ya!” She upgraded me.’

Mrs Obama is the second First Lady to appear on a Vogue cover. Hillary Clinton appeared in the magazine in 1998.

Vogue’s editor, Anna Wintour, was a top fundraiser for the Obama re-election campaign, raking in more than $500,000.

Five hundred thousand gets Vogue a cover with MO and an interview with both of them. Pretty hefty price. Anna Wintour didn’t get that Ambassadorship she paid so dearly for but, she did get BO and MO.