Not much fanfare about the celebration to be held at the White House this evening. But, I am sure there will be hundreds in attendance in spite of the sequester cuts. 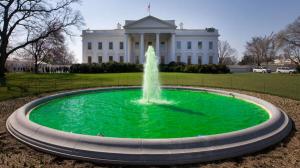 In the meantime 6th graders are out front protesting not being able to tour “the People’s House”. 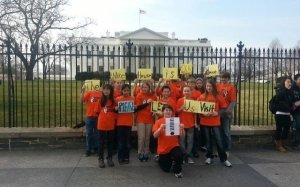 “This house is our house.”

The President has a busy week ahead: The St. Patrick’s festivities on Tuesday include an Oval Office bilateral with the Prime Minister, followed by the annual St. Patrick’s Day luncheon on Capitol Hill.  After a holiday reception in the evening, the President will  depart for the Middle East, making the first foreign trip of his second  term.

As for the Obama’s lavish paycayshuns, …well, ….the Republicans

Confronted about President Obama’s $1 million golf trip, White House Press Secretary Jay Carney attacked Republicans rather than promise that the president will cut back on “lavish vacations” paid for by taxpayers.

“How does the president justify lavish vacations and a golf trip to Florida at taxpayer expense and does he plan to cut back on his travel?” a reporter from Colorado asked after noting the high unemployment rate among minorities and the furloughs that federal employees face under sequester.

Harry Reid took to the floor today to blame sequester for the deaths of Marines training in NV. Using them as a political prop is beyond disgusting. Our thoughts and prayers are with the families of those fallen and injured in the accident.

UPDATE:  The Marine Corps is not happy with Reid and his insinuation.

The Marine Corps is not happy, according to NBC News reporter Jim Miklaszewski (once again by way of RealClearPolitics):

Now I can tell you, Marine Corps officials this afternoon are taking a strong exception to what Harry Reid implied. Saying that this this exercise, for example, was planned well in advance, had nothing to do with the budget cuts. There were no corners cut, and if they couldn’t afford to have all the safety precautions into place, they wouldn’t do the exercise.

And in fact, one Marine Corps official told us a short time ago that he considers this nothing but pure political posturing on the backs of these dead Marines. 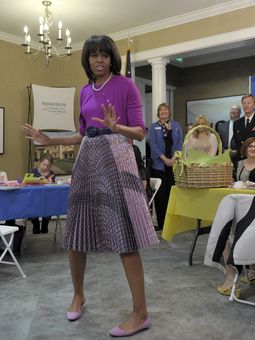 Forgot to use her “princess training”, needs work on standing like a lady…. LOL