Some of what you didn’t see because…..well…..because it doesn’t fit the Obama narrative;

We will not be ignored! 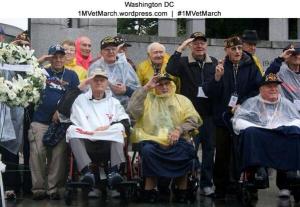 Yes, those men saluting are the ‘terrorists’, ‘anarchists’, and ‘mercenaries’ Obama and the loons in Congress (RINO and Progs) have been warning us about, ‘homegrown terrorists’.

“Mr. President, you have a problem”. 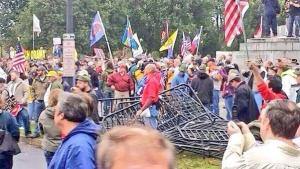 We know you’re hiding in there ……..are you listening? 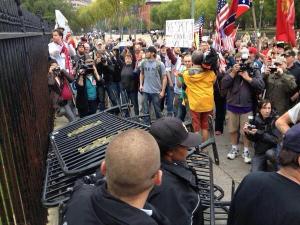 After feeling some discouragement over the politics taking shape in DC, this heartened me. 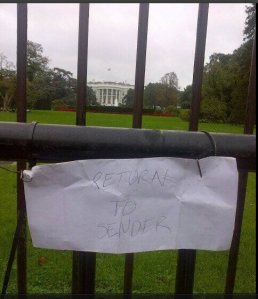 This whole ‘government shutdown’ thing is beginning to take its toll.  One of the best things that has happened, which has also cheered me up greatly, is not seeing MO everywhere we look and not hearing from her on a daily basis telling us how to live, eat, exercise and raise our kids.

It is with a heavy heart that I advise you of a government shutdown that will have a deep and lasting impact on your lives: LADY M’S ORGANIC GARDEN OF GOOD AND EVIL IS WITHERING ON THE VINE!

That’s right! MO got Barry-caded!  No more school children laboring in “The Garden of Good and Evil” for the benefit of the elite crowd in Big White. 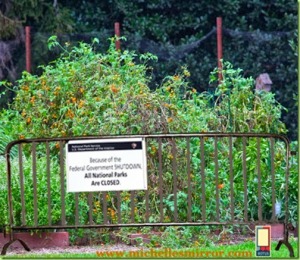 MOTUS has the scoop…

Michelle Obama emerges for the  first time since the shutdown began

Awwwww…she had to cancel her Oct 11 funraising trip for the DNC…..yes, a funraiser

More bureaucratic bungling…..IRS “decides” who gets the “additional child tax credit”…..brought to you by the letters F – R – A – U – D and the letters ITIN…

Dems and their media backers want a collapse of the markets ” as a way to “shake things loose inside the GOP.”

When does Wall Street cast its vote? Bipartisan meetings are nice, and new plans that depend on the other side budging certainly can’t hurt at this stage of a standoff. But there may be only one way to jolt the system: SELL. Conversations with Republican strategists in recent days suggest that only a major event, most likely in the form of a major southward turn in the markets, could shake things loose inside the GOP conference enough to push away from the current crises. That’s what will draw constituent phone calls, and what will turn anger into action – more so, certainly, than vague threats of primary challenges engineered by business interests. The markets could be the 12th man, and the players are weary enough that they may not be able to draw any inspiration from elsewhere in this stadium.

Including the most extreme left-wing partisans, this is the first time I’m aware of when anyone in media or politics have openly encouraged market investors to intentionally create a panic.

Next  April, just as income tax returns are about to be filed, with required paperwork  indicating the taxpayer has health insurance acceptable to the feds, there are  likely to be millions of people claiming they tried to enroll, but could  not.

At  that point, the Republicans who tried to delay the implementation of Obamacare  by a year are going to look pretty good. No matter what the media generated  polls are saying right now.

He  who laughs last, laughs best.

It  is widely believed that Americans hate their health insurance companies. But  just wait until the far less competent, impossible-to-fire federal bureaucrats  are fining people for not buying health insurance they are unable to purchase  because the damn website doesn’t work.